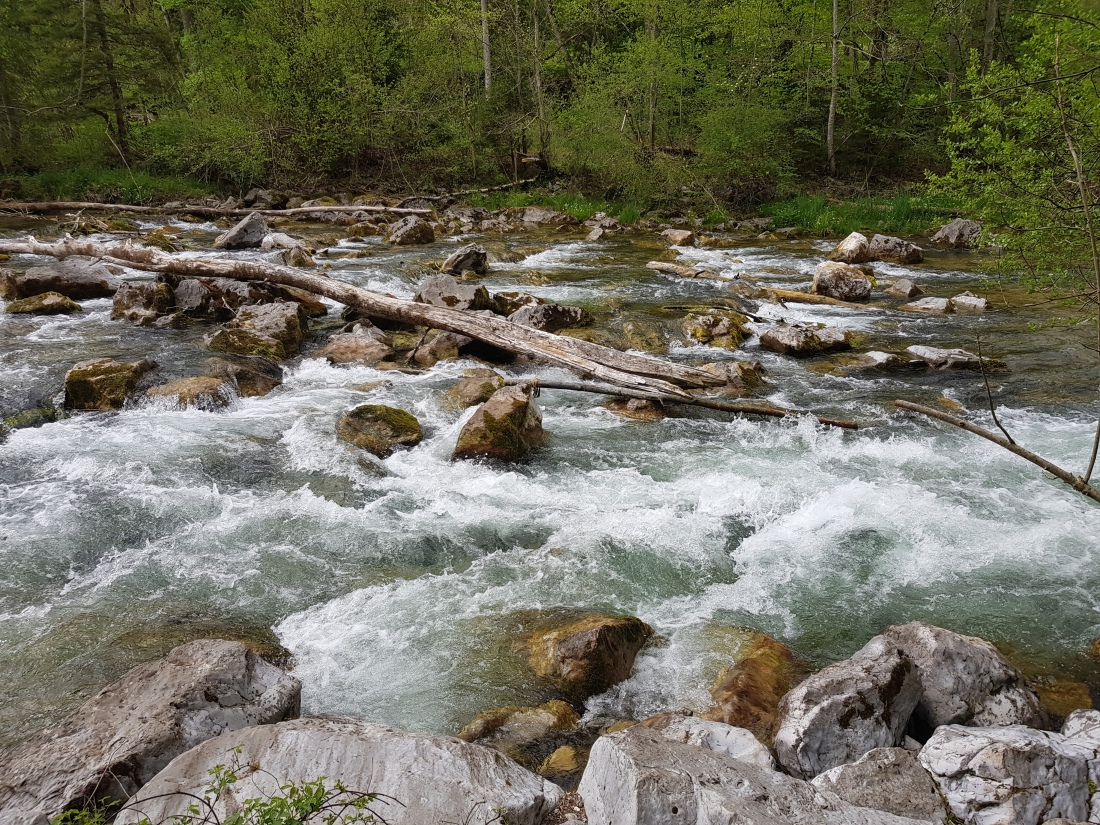 I wanted movement and not a calm course of existence. I wanted excitement and danger and the chance to sacrifice myself for my love. I felt in myself a superabundance of energy which found no outlet in our quiet life.

Exhilarated, my mind flew above the thick undergrowth through which we were trying to cut our way through. We had left the forest trail long back. It was a deliberate choice, for it was my first proper hike and I wanted as raw an experience as possible. The ground was slippery and my poorly equipped feet blooded scratching the shrubbery. We followed a narrow stream of water along the edge of a meadow where bell cows grazed. Enough of bloody scratches, we decided to find the hiking trail again.

Halfway through the path, the trail disappeared into a deep gorge. A gigantic tree had fallen and had taken all the soil with it to the nearby river – which was flowing with momentum and where Kayakers were having plenty of fun. My nearly spent legs strained at the 120-degree angle they had to cover.

But it was worthwhile. We finally reached a flatland – the river had reduced to a narrow stream here. Trousers rolled up thigh-high, shoes abandoned, we ventured into the ice-cold water. Wet stones thick with mosses covered the river bank. We settled on one such stone, sweeping away the snails who had made it their home. Minutes of mindless thinking later, we returned to the warmth of our shoes on the other bank.

The hike led us up the hill to a beautiful village. A couple of buildings populated the scenery. A stone-built old-looking building had a writer’s name – which I long forgot.

Neatly trimmed fields, as far as your eyes can see and the Alps afar. A feast for the eyes and comfort for the nearly spent body.

Dozens of hikes later when I look back I realize the euphoria, the ecstasy remains as new as ever.

Words kept disappearing down the shaft

She couldn’t find the right words to describe her pain,

her sadness, her loss of memory, hunger, and other needs.

as white and pure as the snow on top of Zugspitze

Water dripped out of what was left of her body

and flowed until it met Isar, lord of the shapeshifters.

Evelyn Jose was piling up the Tetris blocks to optimize their destruction. Blocks of various shapes and sizes were dropping quickly. Down came a square block, then an L block, Evelyn began to sweat.

Eureka! Shouted a naked Evelyn in her bathtub. The Tetris game fell into the full tub and went deep down into oblivion. Evelyn jumped out of the tub, went to her computer, and posted a mail to her Ph.D. supervisor about her latest discovery on the secrets of immortality.

Dr. Steinbach, sensing the urgency in Evelyn’s mail immediately skyped her, only to find a half-naked Evelyn, basking in the glory of her newfound theorem and furiously writing away at the whiteboard.

Humans just have to grow one more limb, argued Evelyn, defy nature and you defy the laws! Be as unsymmetrical as possible! Create chaos, grow limbs, paint your one side blue and the other green, wear a black socks on one foot and orange on the other, place one leg in front and the other back, be as unsymmetrical as you can and immortality will all be in your grasp! Evelyn was emphatically jumping and arguing beating the whiteboard several times in her excitement.

Evelyn Rose woke up like a kitten that day. With whiskers as long as her tail and a stomach as hungry as ever. Ah! the troubles of a shapeshifter, how would I find somebody to feed me now! sighed Evelyn.

Evelyn the kitty crawled out of her room in the attic and dragged her body down the stairs. The theatre downstairs was already abuzz with activity. Hopefully, she would find some good Samaritan in the green room to the left.

‘Ow little kitty, did you get lost?’ A plump woman in her middle age, with feathers for skin, picked her up. Evelyn felt strangely comforting in her body heat. She curled up to the woman’s bosom and yawned a little.

‘Oh my god! she is so cute, let me feed her’. The woman took Evelyn to the dressing table and took a milk bottle from her bag. She squeezed a couple of drops on the tabletop and put down Evelyn.

Oh heaven, I haven’t had this tasty food in ages, thought Evelyn. She hungrily licked the table clean.

‘Ejona, what the hell are you doing?! It’s time for you to go on stage.’ Roared stage manager Carlos from behind the curtain.

“Warning! T-five seconds to impact”, the monotonous void in the tiny spaceship coolly declared. Baby Kal, who was fast asleep in the five-by-five space-cradle, through the journey across space, woke up with a start.

The tiny spaceship crash-landed on a remote village in the middle of nowhere. The Kent family, who were passing by after a midnight star watch date in the desert saw the explosion, marveled at the blue-eyed baby, and took him home.

The Kent family was childless. Mrs. Kent was well past her reproductive age of 203 and was unable to bear a child. All his life, Mr. Kent was was deeply embroiled in planetary politics and never cared enough of Mrs. Kent to think of a family together. It was only when the 8th inter-planetary war began that Mr. Kent thought of retiring. The Kent family decided to abscond to the remote village of Dubai, in the middle of the desert, and to live a peaceful retirement life.

Baby Kal was from the now-destroyed planet Krypton. The eighth interplanetary war had caused tremendous destruction to both sides and Krypton, a planet inhabited by the aero-homosapiens were a fatality. In fact, Mr. Kent himself had signed the order of destruction of Krypton. But how the Kryptonians mustered enough courage to fly the baby to the gods of earth, Kent couldn’t fathom.

Baby Kal grew up alone in the desert. He flew well, brought joy to the Kent family. But unlike the gods of earth, Baby Kal was mortal. Mr. Kent obtained special permission from the king to make Baby Kal an adult at the age of 18, unlike the immortal children of earth, whose legal age is 38. Baby Kal grew up, had his first drink at the local bar, married 106-year-old La-al at the age of 23, had his first kid at 25, and relocated to the ocean state of Australia at 34. Mr. and Mrs. Kent were really upset with his last move and they blamed it on Kent’s wife La-al. This family drift caused Kent to lose financial support from his foster parents, upon which he had to work as a journalist for the local news. Kent died at 82, after a long and happy life with his kids and grandchildren.

The Martian angels wept their hearts out. The planet was destroyed, all beings dead. No creature would beg for mercy now. No beings to curse and no Satan to banish.

God in all his mightiness felt pity for the angels and decided to intervene. He called Astra, head of the angels, and pointed to a far away pale blue dot.

Astra looked at the still-terraforming planet and decided to twist and bend the baby planet to the angel’s will and to migrate there. The angels together decided to sow the left-over Martian sperms on the planet and to wait till they grow and mature.

Thus formed man, a by-product of the angel’s experiments. The original Martian sperm was of course, of the species man now calls Dolphin.